As of 2016, Twitter has an average 313 million active monthly users.

With such a huge number of people using this platform, it’s a social channel that holds a wealth of potential for business activity.

From breaking news to celebrity soundboarding, Twitter delivers right here, right now content to the masses. Something you should be a part of if you want to be relevant.

As an SME, being able to unlock the power of Twitter for business can bring with it a whole host of benefits: gaining followers, building a community and spreading the word about your business are all positives that can lead to bigger levels of success.

Best of all, you don’t have to spend months mulling over your strategy to get going. There are many things you can do straight away.

Here’s how should you be using Twitter, right now…

Twitter is a place of free personal expression – and (of course, within reason) that applies to your business too. It’s perfect for showing off your brand tone in an authentic way. Giving people an insight into who you really are and how you really think.

If you’re a sportswear brand, you can run a commentary on a big sporting event. Or as a company within the building industry, you can comment on some of the world’s most impressive structures. Twitter allows your business to easily widen its talking points, casting the net even further when it comes to attracting attention.

As long as you know where the line is, Twitter is a platform that your business can really have fun with.

One brand doing this to excellent effect is Tesco Mobile. They are using humour and real human language to stand apart and challenge their perceived image.

They are calling out people poking fun at them and bravely interacting with other high-profile brands. As described by Adweek.com, their Twitter feed is not only hilarious, but is a serious share-gaining strategy. 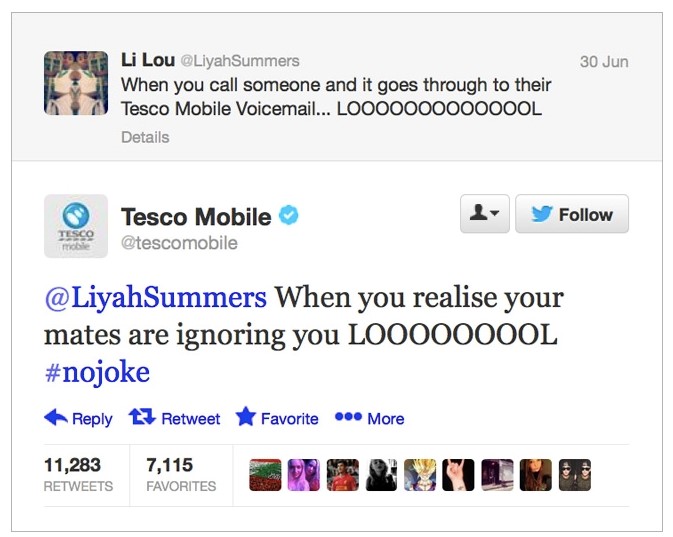 #2 – Reach Out to Influencers

Twitter is the third biggest social media traffic driver – which tells you a lot about how effective it can be for your lead generation. And while offering a call-to-action is great, you can multiply its effect with the help of an influencer.

Influencers are essentially pack-leaders – as often demonstrated by their healthy following on social media channels. As a brand, you should be able to identify suitable influencers and leverage their following to elevate your message.

Nearly 40% of Twitter users say they’ve made a purchase as a direct result of a Tweet from an influencer. They are a powerful tool when it comes to marketing, and though they may not always come cheap, they are a route worth exploring.

Then, start building honest relationships with those influencers by engaging in conversations.

If you have a product that is of value to an influencer, then reach out and introduce yourself and your brand, talk about why your product is different and why they should try it out.

This can be a very effective way to build traction and get your product out there in the market.

But remember, relationships are key. Don’t reach out unless the influencer already knows who you are, as there’s a much greater chance they’ll be interested in what you have to say.

Buzzsumo is an excellent tool for finding influencers, and is rapidly becoming one of the most used tools for influencer marketing on the web.

This way, you can discover their favourite interests and send out a personalised email to grab their attention.

#3 – Use Hashtags to Spread Your Message & Grow Your Community

Hashtags pool together people who are discussing the same thing, making them a natural tool for business. But they need to be used effectively if they are to bring real value to your brand.

It’s not often enough to just ask followers to hashtag the name of your business or product, it is much more effective to give them a reason to use the hashtag in the first place.

A great example of this is with toilet roll brand Charmin. Taking an active interest in a ‘better bathroom experience’ led them to use hashtags to their advantage, with #TweetFromTheSeat.

Toilet humour is a tricky one, and certainly leaves itself open to abuse, but some well-thought out examples from Charmin got the ball rolling for some great interaction and the campaign is even recognised by the Shorty Awards. 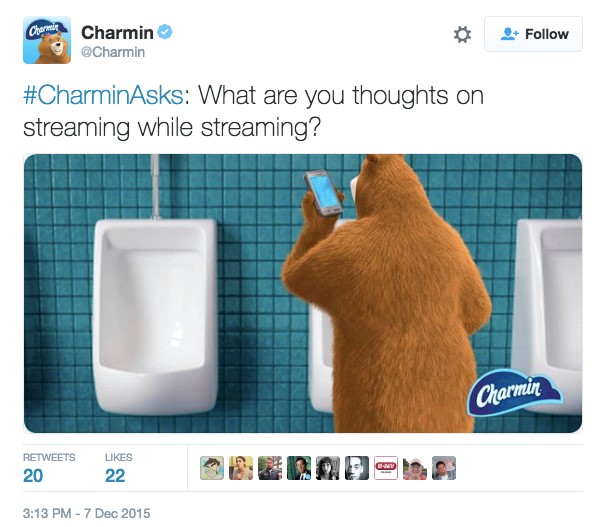 #4 – Make it a Conversation

Twitter is a two-way street. You can talk to customers, and they can talk back to you – which is something you can turn into a very positive situation if managed correctly.

Making your Twitter conversational will cause your interactions to thrive, as people who receive replies will inevitably feel better than those who don’t – causing a positive vibe around your brand.

There are plenty of brands having awesome conversations on Twitter that will show you exactly how it’s done. They are making themselves heard whilst pleasing their customers and attracting wider attention as they go – the perfect social media-based combination.

A great thing about the conversational nature of Twitter, is that it means your customers can often instigate great content for your brand.

Take Southampton FC for example – a fan tweeted the club to ask the identity of a girl seated near him that he claimed was showing an interest in him. After picking up the conversation, suggesting that the fan should bite the bullet and approach her, the club then took it a step further.

They left flowers and Bovril on the fan’s seat for the next game, to help him break the ice – prompting a sweet picture (via Twitter, of course) from the pair enjoying their introduction and hoards of fans also tweeting their delight.

With two national papers telling the story and thousands sharing the tale on Twitter, it’s a great example of how a genuine conversation, a show of personality and going above and beyond can create all the right kinds of attention.

If your budget allows, Twitter Ads can bring you quick wins. They target your customer based on Twitter activity and you are charged according to relevant actions taken.

Promoted tweets have the potential to bring about great engagement, but it’s not as simple as putting money behind your best thoughts. Those that do really well are promoted alongside relevant circumstances, like heart shaped pizza on Valentine’s Day and new vehicle unveiling during the Superbowl.

#7 – Check Out Your Competition

Another thing we love about social media? It’s all out there for everyone to see.

Twitter is great at keeping an eye on your competition, and using them to benchmark. You can see how many followers your competitors have, as well as being able to see what they are saying and how their offering differs from yours.

This doesn’t mean to say that you should be imitating other brands on Twitter, but it certainly pays to be clued up about what’s going on around you which should serve as an excellent motivator for your own business.

Always remember that your business Twitter account is something that needs to be nurtured if you’re expecting it to grow. The instant nature of the platform means that your content should be swiftly-thought-up and your interactions should be quick off the mark too.

Customers like to see active social channels. So even when you think no one is listening, don’t give it up as you’re building a solid base for healthy growth.

So there you have it – 8 actionable tips to get your small business buzzing in the world of Twitter.

Even if you just take one on board, these steps can help you not only find your feet, but make big strides as you connect with your customers online. If you take a browse on Twitter now, you will recognise some of the above from some of your favourite brands.

You don’t have to go full pelt straight away, cracking jokes and sending gifts. But you can test the waters as you become more confident – always making sure you stay true to your brand.

Twitter sees an average 6000 tweets per second, so while you need to stand out, you also needn’t fret if you don’t go viral straight away.

Get to know the platform, let its users get to know you, and you’ll be winning in no time.