Snapchat seems to be one of those apps that initially felt like it would lose its novelty and fall by the wayside but has since gone from strength to strength. From video chats to geofilters to facial filters, new features have seen increased usership not only amongst the core “millennial” audience but also businesses. The latest feature, the on demand geofilters, look set to offer businesses (especially SMEs) a great opportunity to engage with their target demographic.

So what are on demand geofilters?

Geo filters are an overlay which can be added to snapchats when people are in a specific location (see below). Many of the large cities around the world already have standard geofilters, however Snapchat now allows businesses to promote themselves by creating their own filters and having them displayed for a fee, calling the service “on demand geofilters”. 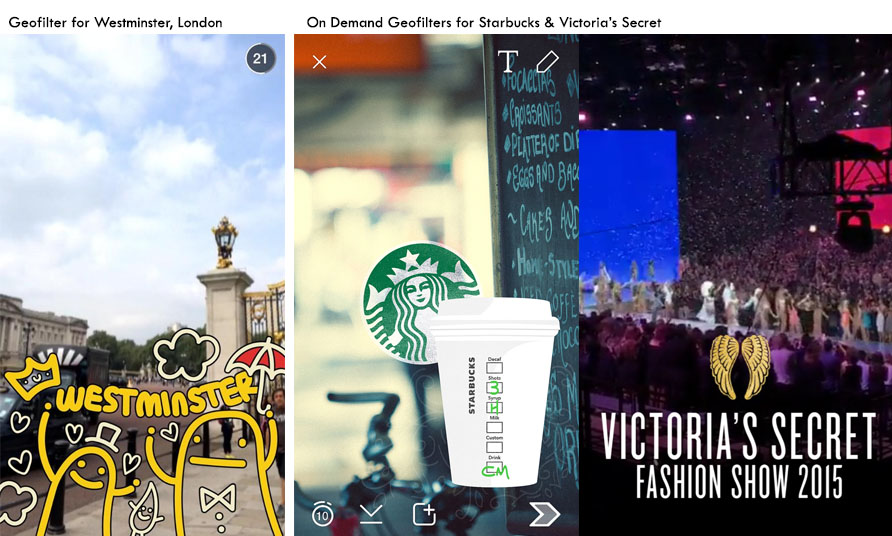 The process of setting up an on demand geofilter is made up of 4 stages:

When to use them

Geofilters can be used for virtually any occasion, but as a business you want to use them when you feel people are likely to share their experience over snapchat and in turn actually make full use of the filter.

Parties and celebrations – With millennials being the prime users of snapchats, parties and such events make an ideal fit for on demand geo filters. The summer months are packed with music festivals around the UK which can allow you to target thousands of revellers who are likely to snapchat their experiences, to which they’ll happily add an eye catching filter featuring your brand to.

Celebratory occasions make for a great time to use geo filters as they’re events which are likely to be shared amongst friends and family. For example, universities can benefit from using geo filters during graduation ceremonies, allowing students to apply the filter to their snapchats and in turn promote the university to their snapchat followers.

Sports events – sporting events are regularly snapchatted by viewers whether their sat in a bar or at the actual event. This means it can work for both sports clubs and professionals along with pubs and bars which broadcast events. Take the upcoming Euro 2016 tournament for example, pubs and bars showing the matches could use geo filters during the games. The artwork for the filters could simply have their logo along with a simple caption such as “Come on England!”, this would give the filter purpose to be used and would promote the bar in the process.

Food – pictures of food have become increasingly prevalent on social media an estimated 29 million food pictures being posted online in 2014. Therefore having the option of adding an appeal on demand geofilter will allow people to not only take a picture of their food but also notify others of where they’re eating. This can work for a range of establishments such as restaurants, coffee shops or even dessert parlours. Additionally, you could also tailor your filters for specific times of the year when you know people are likely to visit. For example, a Valentine’s day themed filter would likely be used amongst couples dining at a restaurant.

Don’t over complicate your filter – the maximum length of a Snapchat is 10 seconds so while you want to keep it eye catching and appealing enough for people to encourage people to see it, you still want those viewing the Snapchat to be able to quickly take in the information (such as your brand).

Design it for free – Don’t unnecessarily waste money on having a design created for you (unless you want to create something really extravagant which in most cases won’t be necessary). There are plenty of free sites (such as Canva) which allow you to easily create appealing graphics. If you find yourself struggling, follow one of the many guides on Google before resorting to paying for help.

Make it engaging – In order to encourage the use of your geofilters you can incorporate them into a wider campaign. For example, you can get users to screenshot or download their snapchat picture featuring your geofilter and then post it on twitter or Instagram for them to have a chance to win a prize.

Time it right – make your filter active for the times when it’ll actually be used. For example if a restaurant is only wanting to have a geo filter within its premises for one day then it is better served to make it active during its opening hours as opposed to having it active from 12am till 11pm. For example having a geofilter covering the Univerisity of Leeds from 12am – 11pm will cost around $350, however reduce those hours to 9am – 7pm (when it’s most likely to be used) and you’re looking at a cost of around $150.

If your target audience falls anywhere near the 18-30 year olds then you should be considering trying out Snapchat’s on demand geofilters.