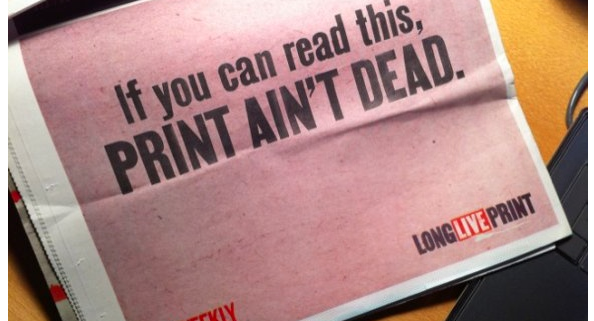 The notion that “print is dead” is something that has become all too familiar with many people, however they’ve failed to realise that in actual fact it couldn’t be further from the truth. Print media is probably just as important now as it has ever been before and it certainly has a part to play in your marketing. We’ve looked at why you should still be looking to use print media alongside digital means to communicate with your customers.

The world of digital has grown so vast that we’re now flooded with messages on a constant basis. With mobiles and tablets now joining the likes of TVs, laptops and PCs, people are consuming more time in front of a screen. Many will argue that if people are spending more time on mobile then surely it’s the best place to target them right? Well yes it is to a certain extent, but given the amount of information users are forced to consume, from the countless number of daily emails received to the ever growing streams of social media updates and ads, a lot of information is often ignored. Therefore brands must do more to capture the attention of consumers.

Now this doesn’t mean that digital media should be forgotten about, however SMEs should be actively looking to incorporate both print alongside digital media to create more effective marketing campaigns.

The popularity and growth of digital media is what has almost led to the resurgence of print media. With so many generic digital communications being received on a daily basis, having an eye catching printed communication addressed personally to you is now somewhat refreshing.

In addition to this one of the biggest benefits of printed media is that it can reach individuals when it really matters which is when they’re at home. Around 81% of all purchases (b2c more so than b2b) are made when buyers are at home so there’s no better place to be reaching them. Printed forms of media are considered to be one of the best ways to making it into many households. Having your brand on sight when people are more inclined to make a purchase could be the difference between your brand being chosen or ignored.

The length of time printed communications remain relevant is also higher than that for many digital alternatives. Many brochures, magazines and flyers are kept in houses for a period of time before they are discarded. As a result, they’re often read or at least seen by more than the person they’re initially intended for. This extended reach and duration of printed communications further goes to show how it is still of relevance.

Print media goes way beyond marketing collateral such as brochures and flyers. Everything which is print related, which goes as far as the packaging of your products, are all considered as forms of print media. A great way of adding further appeal to your print media is by allowing an element of customisation.

Over the past few years we’ve seen a growing trend in the popularity of personalisation, especially when it comes to packaging. Two major brands which have demonstrated it to great effect have been Coca Cola and Nutella. Both campaigns worked in a similar fashion by allowing buyers to have their names printed on the packaging. This saw many people post pictures of their personalised products on social media, bringing together both print and digital media. Coke’s campaign proved incredibly successful with figures for their Share a Coke campaign from 2014 reading as:

So there’s some food for thought for your future marketing campaigns. If you want to engage and better communicate with your customers, then look to integrate both print and digital media into your marketing activities.

How Changes to Google AdWords Will Affect Your SME

5 reasons why marketing needs to be continuous
Scroll to top